Understanding the Reason Behind the Decline of the Deer Population 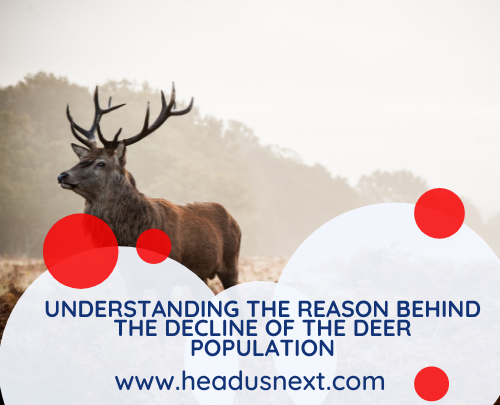 Once, large herds of caribou thrived throughout North America. Now, not a single caribou lives in America, and only small herds exist in Canada and Alaska.

Is the US in danger of seeing its native deer population head down this path? At a few points in the 20th century, yes, this was the case. Thankfully, today, the American deer population has grown to pre-Colonisation numbers since the near-extinction levels recorded in 1900.

But this isn’t the end of the story. Deer herd size is in a slow yet steady decline and has been since 2000. Read on to find out why.

Chronic wasting disease (CWD) is a neurological illness first discovered by scientists in 1967.

It’s highly contagious, affecting cervids (animals in the deer family) at all life stages–from an adult to a baby fawn. But, to date, it hasn’t been detected in livestock or humans.

CWD has been found in deer populations in over 20 American states, two provinces in Canada, and in South Korea. It spreads quickly among herds through contact with:

Most scientists and wildlife managers working in deer conservation fear this disease alone will send deer populations plummeting in the decades to come.

Predators like coyotes and bears mostly attack young fawns. A 2000-2001 study by the Pennsylvania Game Commission found that 84 percent of radio-tagged fawns were killed before nine weeks old. Research in other states yielded similar, if not worse, results.

By contrast, less than 1 percent of the radio-tagged adult deer were killed by predators. It’s statistics like these that lead to some states implementing wildlife control tactics.

However, the science is murky and unclear on whether predators are the cause of deer decline. Several leading researchers argue that deer herds and predators can, and do, cohabit certain parts of the United States. Predators play a beneficial purpose in a healthy ecosystem, they say.

In 2021, the USDA enrolled just over 20 million acres of land into the Conservation Reserve Program (CRP).

The program works by paying landowners to turn their cropland back into areas of biodiversity. It not only serves to mitigate several million metric tons of CO2e but also helps preserve land for wildlife–including numerous species of deer.

But is this enough? America’s landmass is 2.3 billion acres, and almost half of that is agricultural land. Given the critical deer statistics, if we don’t act quickly to halt habitat loss, we might only see deer in pictures or a wildlife game one day.

From habitat loss and deer harvest to an (arguable) over-abundance of predators, the reason for America’s declining deer population is nuanced. But, in many cases, humans have had a significant part to play–and we still do. If you’re concerned about deer numbers in your area or state, volunteer your time to reforestation and animal conservation efforts.

Check out the other articles on our website for more quick looks into the environmental issues affecting America today.